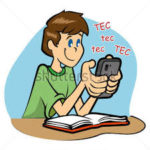 Let’s discuss smartphones.  Smartphones are commonplace today and almost everyone has one.  Everywhere you look there are  people with their heads down, tapping away sending text messages, sending, receiving, replying to email, streaming movies, watching sporting events, playing games, browsing the Internet, taking pictures and selfies.  It’s hard to imagine life without a smartphone.

Believe it or not, the smartphone goes back more than a decade.

Just when the Palm V made it’s debut to include telephone service, the BlackBerry came on the market in 1999 functioning as a two-way pager.  The BlackBerry evolved with additional features like email and text messages, web browsing, voice communications, and even Internet faxing functionality.  The Blackberry has PDA-style applications such as calendars and address books.  The most highly praised function was its ability to send and receive email anywhere a wireless network may be accessed.  Plus, the BlackBerry came with a QWERTY keypad to make it easier to send email than with many other handheld devices.

The very first mobile phone was developed by IBM and it was called the Simon Personal Communicator.  Simon had a monochrome touch screen, a stylus, and a charging base station.  Despite being able to send and receive emails and faxes, Simon was never technically called a smartphone, though in hindsight, that’s exactly what it was.  Since then, the cell phone evolved into a smartphone and took off in the consumer market.

In the beginning, smartphones were originally targeted toward enterprise and business users who needed to stay connected on the go.  The sheer volume of handsets and the convenience of on-demand Internet from practically anywhere in the world attracted the consumer market.

In 2007, the wireless industry took a dramatic turn.  When Apple announced the iPhone, the idea of the smartphone combined powerful multimedia functions with the same email and Web browsing features as all other smartphones previously had.  It had a large color display and its user interface was finger friendly.  The phone also had only one button on its face (the Home button) and three on the side (two for volume and one for power/standby mode).  It was the first glimpse into the today’s smartphone.

Google acquired Android, Inc. in 2005, a little known company that would allow Google to enter the mobile phone market. Google bought Android on an interesting concept-of creating a powerful, yet free mobile operating system.  Android helped Google to reach a younger audience in the cell phone market. Early Android devices weren’t successful.  The biggest flaw was the design of the device.  However, the processing power of the Android operating system was well received, which was the first indicator this would be a viable competitor.

Several years later, Microsoft developed its own version of the smartphone.  The Windows smartphone was not as popular as the iPhone or the Android or and has always been lagging behind in market share and number of apps available.  Recent speculation is that Microsoft entered the smartphone market too late. Consumers already had loyalty to iPhone and Android products, making it difficult to penetrate the market.

Today, almost all businesses today rely on smartphones used by their employees.  Smartphones have crossed the line from luxury to a necessity. They are used as a tool to gather information for business purposes, making the employee more productive.