By Michael DeFlorio on December 23, 2014 in Mike’s Tech Tips 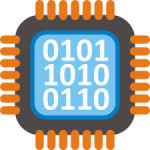 A microprocessor also known as a CPU (central processing unit) is a complete computation engine that is fabricated on a single microchip.  The first microchip was introduced by Intel in 1971.  The chip was not very powerful, all it could do was add and subtract.  But it was amazing that everything was on one chip.  Intel also introduced the first microprocessor for the home computer in 1979.

There are essentially two different processors available.  ARM processors are used for small battery- operated devices.  Intel and AMD are used almost exclusively in desktop PC’s, laptops and servers.  Let’s look at the breakdown of each of these.

ARM Processors – When you purchase an iPhone, iPad, digital camera, or a tablet, you don’t have a choice of processors as you would do when purchasing a PC.  Almost all small electronic devices with a microprocessor use ARM processors; however, not all ARM processors are the same.  ARM processors don’t require much power to run, which makes them ideal for battery- powered devices.

32 bit vs. 64 bit– These two terms are often used when looking to purchase software and hardware.  They are used to identify the processor speed on computers.  Most people don’t know what these terms mean or understand the mechanics.   Before getting into more detail, we need to define “bit” and how it’s used in a computer.

By definition, a bit is an acronym for “binary digit”.  Binary digits are represented by either a 1 or 0.  When binary digits are strung together they look like a bunch of 0’s and 1’s.  For example, the number 111 is written in binary code as the number 7.  To the average user this means nothing but keep in mind that a computer can only read and process information written in binary code.   These “bit” numbers refer to the type of numbers that the registers of the computer processor can handle.

Now let’s look at some differences between 32bit and 64bit.

64 bit Processor – The 64 bit computer has been around since 1961 when IBM created the supercomputer.  However, it was not put into use in home computers until the early 2000s. Windows Vista, Windows 7 and Windows 8.1 all come with a 64 bit processor.

There are certainly some differences regarding performance.  Here are a few.

Speed – There is a big difference between 32 bit and 64 bit processors in the number of calculations per second they can perform.  This affects the speed at which they can complete tasks.  A 64 bit processor can come in dual core, quad core, six core, and eight core versions for home computing.  Multiple cores allow an increased number of calculations per second that can be performed, which can increase processing power and make a computer run faster.

Memory (RAM) Supported – 32 bit processors computers support a maximum of 3 to 4GB of memory, whereas a 64 bit computer can support memory amounts over 4GB.  This is important for software programs that are used for graphical design, engineering design or video editing.

In closing, 64 bit processors are becoming more and more commonplace in home computers.  Most manufacturers build computers with 64 bit processors due to cheaper prices and because more people are now using 64 bit operating systems and programs.  Computer parts retailers are offering fewer and fewer 32 bit processors and soon may not offer any.